Who knew male models could be so smart and interesting? I did!

For many years I’ve had to defend my male model friends, as people see the profession in a very dumb and marginalized way. The same doesn’t happen with female models. But why?

In an effort to show the true beauty of men, I have now started to include them in my bi-weekly Model Musing columns on Look Books. My goal is to show the beauty that these men carry inside them, and to show that being a model is not only about looking good in the picture or having perfect abs. 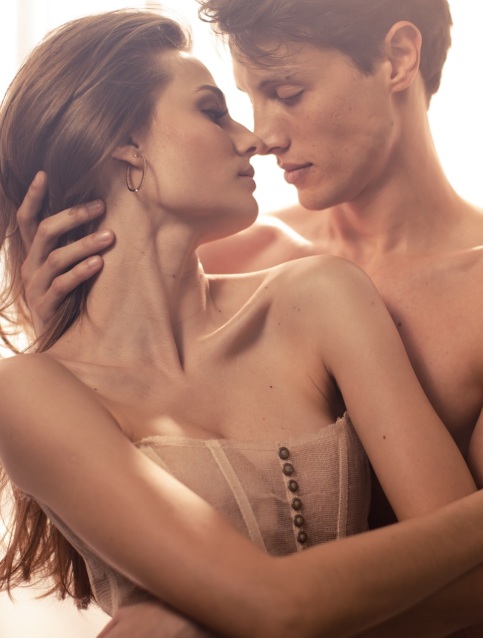 It was when Fabio found himself in front of a camera and had the photographer ask him to “smile with the eyes” that he realized what it was like to be a model. Fabio’s career didn’t start by chance, his sister always said he would be a model. The minute the boy turned 16 years old, she took him to an agency near their small home town, in Porto Alegre, Brazil, for a test shoot. From that first shoot on, Fabio has accumulated trips around the world, jobs with renowned photographers and designers and a smoking hot girlfriend that would not have been possible if it wasn’t for his job.
The owner of his own business alongside his loved one, the model Carolina Fontaneti, Fabio took some time from his busy schedule to tell us why this picture means so much to him.
Why do you love this picture?
Because it’s me and my girlfriend, working together for Vogue Brazil. I really admire my girlfriend’s career as a model, she is a constant source of inspiration. It was a great pleasure working with her.
Who took it? Were you excited to work with this photographer?
It was Renne Castrucci, who along with Fabio Delai also created a video editorial. I really admire their work, they are great in what they do. These two do their job from their hearts, and you can see it in the images.
What was the location for this shoot?
It was a 500 year old coffee farm from Brazil’s colonial times; it was a truly beautiful and inspiring setting.
Who was the stylist?
Giovanni Frasson, the fashion director of Vogue Brazil.
What were you wearing?
Calvin Klein underwear.
What was the direction given to you by the photographer?
“Act natural! Think that you are in your honeymoon with your wife!” – and that was easy, is there anything better than that?
Do you see yourself doing anything else besides modeling?
I do;  in fact I do several different things at the same time. I know that most people who like to cook seem to think they are great at it, and I also believe I am. I believe I am a great cook and I would love to have my own restaurant when I reach my 40’s. I have also been contemplating doing something in real estate as an investment, but currently I am invested in this clothing store that I have opened with my girlfriend back home and in which I sell exclusive products with the help from my close friends who are a part of my sales team.
Do you love fashion?
I do, and I respect it a lot too.
And what have you learned from your career as a model?
I’ve learned that life is what you make of it. You can’t separate your personal life from work but you can’t also make of this connection something bad, you have to find balance so that with each moment you can become better as a person and as a professional. I love  the chance to meet new people through work and with that to see the difference between the good and the bad ones and to learn to differentiate what I  want to be from what I shouldn’t be. I learned that having a friend is more important than having a thousand followers.
Fabio Nunes is represented by Way Model and you can follow him on twitter@F1Nunes