How many people can say they had their pubic hair combed by Tom Ford? Not many, but the subject of this week’s Model Musing column certainly can. Have a read after the jump or below to find out more about Christopher Camplin. 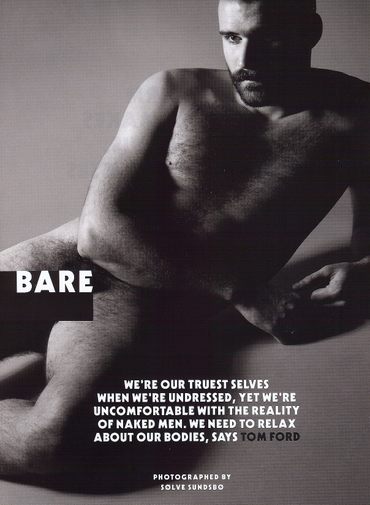 Christopher Camplin is your regular handsome English bloke, a web developer who lives in London, he is also the perfect tale of the accidental model. Approached by identical twins at an after hours club one night, he was asked whether he would like to be presented as an option for a shoot with Tom Ford. At the time it didn’t seem like a bad idea, and it turns out he was in fact chosen for the part. Being naked in GQ was not what he was thinking when he signed up for this gig, but after a few shots of vodka he was ready to have Tom Ford combing his body hair, and as Norma Desmond would say, he was ready for his close up.
With a modeling career that was kicked off with one of the biggest blessings in a very  exclusive industry, Christopher’s path was set. A collection of selective and high end bookings have followed since then, always in parallel with his work as a web developer, as well as stints as a DJ here and there. Here he picks his favorite picture as a model and tells us a little bit more about his thoughts on the industry.
Do you think modeling is perceived by society in a different way for men than it is for women?
Not specifically, I don’t think society’s perception of female and male models is particularly different, models often seem to be regarded as unintelligent regardless of their sex.
Was modeling ever a dream of yours?
It was never something I’d really considered, I was scouted purely by chance and it gradually snow balled from there. I never expected to get more work after each job in the beginning. I still wonder now!
What were your most remarkable experiences as a model?
I would have to say Tom Ford combing my pubic hair or walking down on an elevated travelator for Walter Van Beirendonck’s “Dream The World Awake” video for a retrospective of his work.
So why is this image your favorite?
This was a recent shoot I did , for Lee Paton’s latest collection. I mostly love it because I got to work with the Huskies, they were beautiful and really well behaved.
Who took it?
The photographer was Lee Roberts, always a pleasure to work with – a lovely man.
What were you thinking when this picture was being taken?
“I want to own some Huskies.”
Was there a theme for the shoot?
The theme of the collection was an arctic exhibition.
Is there any advice you would like to share with aspiring models?
I didn’t really make any effort to become a model so I can’t advise on that, but… learn to be comfortable in your own skin and accept yourself is the advice I would give.
Christopher is represented by Models 1.

9:44PM - today I had a coaching session #mensfashion #coach #fashion
8:37PM - we don’t always agree, we don’t always share the same perspectives, we are apart most of the time, but whatever happens, there is always love. You are my mother and no matter how crazy you can make me sometimes, you make me crazy with love. Thank you for always doing your very best. Happy Mother’s Day. 😘 💐
12:46PM - “don’t let me hear you say life’s taking you nowhere” #DavidBowie #GoldenYears #quoteoftheday #saturdayvibes
8:06AM - happy earth day 🌎 a look back at this wonderful trip to the south of France, a place of exuberant beauty: landscape, food, people, it all comes together! What’s a place you’ve been that brings up this kind of memory?
1:36PM - ruins or foundations? #MachuPicchu #travel
10:57AM - London, calling!