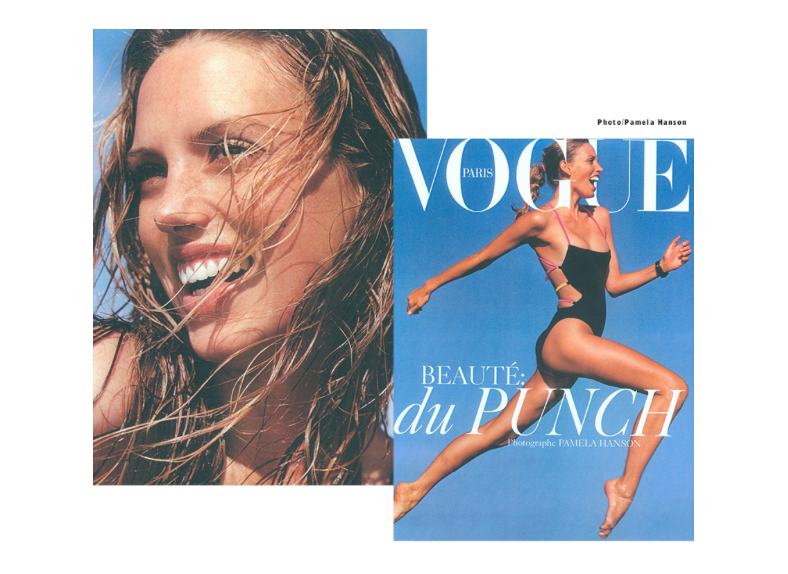 Leilani Bishop is a household name in the modeling industry. In the nineties she became known as that healthy, smiley, surfer girl that had the all American look which the all American designers had been looking for, for so long. She became a hit in campaigns for brands such as Tommy Hilfiger and graced the pages and covers of magazines such as Vogue and Allure. The model broke boundaries and even graced the cover of the top selling record Live Through This, by the grunge band Hole, fronted by none other than Courtney Love.

After enjoying years in the spotlight, traveling around the world and collecting experiences as a model, Leilani moved back home, to her native Hawaii, where she had the bright and unique idea of starting her own line of fragrances. Unlike most famed models, Leilani took the longer route, built the company from scratch, over much work and investigation.

Leilani Bishop Fragrances is now an established and unique business in a somewhat overcrowded industry. But that doesn’t seem to worry the model turned fragrance “designer”, she’s as calm about her business as she’s always been about her career as a model. Bishop tackles one task at a time, with an ease that can only be credited to a Hawaiian upbringing. Here, the entrepreneur shares a little of her story with us.

What brought you to the idea of creating your own fragrance line, versus putting your name on a mass-produced product, like most top models and celebrities have been doing lately?

I wanted to own and create something, I love to be involved and like being able to have a say in every aspect; control freak or entrepreneur, it is a fine line! I also wanted to capitalize on my own image and persona instead of yet again representing someone else’s company, and wanted to do it on my terms so if it worked I could build a company around the line.

How complicated was it to get from the idea to the actual development of a product?

It took longer then I thought it would. I also learned a lot about myself and the way I operate. I have streamlined myself quite a lot from the minute I started this project 8 years ago. I am much more efficient, but still was not easy breaking into a world that is very traditional in the way it operates.

I did some research on oil fragrances and it doesn’t seem like there are many, if any, of known brand options available, most known brands opt for alcohol based, spray fragrances. The companies that do make oil scents don’t have an appealing image and seem to try to mimic other known brand scents. Even though the idea to use oil as a fragrance is not a new concept; your entire concept is certainly innovative. From the bottle, to the roll-on, to the idea of making oil fragrances a more appealing and elegant item. Did you feel that lacking I mentioned and did those factors contribute in your decision making?

Yes! All of those aspects were a huge part of what motivated me in my decision-making. I am slightly obsessed with the Victorian age, every little thing they used down to toothpicks were elegant and made of beautiful materials. I wanted a woman to have an experience not only with the scent but with the entire image the item represents, from the beauty of the package to the sensation of rolling it on and the clean light scent of the oil.

How extensive was your research when putting together the concepts for your company and about how much time did it take you from the first time you had the idea to your actual first bottle of your own fragrance?

It was an extensive process that spanned from start to launch seven years. I was living in Hawaii when I conceptualized the idea and so that was probably why it had a slow start. It took a while to break into the trade side of everything as it is a small industry and not many cater to small companies. I did not do much research as to what was wanted or needed though; only research on how things were executed.

In your website you teach the customer how to apply your fragrance. One would think that wearing perfume would not require instructions, but after reading the points you make in the website we wonder how could we have gone all these years without that knowledge. Where did you learn such information and was this an important differential fact you wanted to offer your customers?

It was a conversation that came about between me and a girl that was working with me, Piper. We were discussing the differences of oil versus spray, pros and cons, and the act of rubbing your wrist together came up. Piper has extensive perfume background and has worked at big perfume houses and she enlightened me on that myth; “rubbing it in” is really destroying the fragrance. It got me interested and so we thought the consumer should be enlightened as well have a sensibility about the elegance of wearing fragrance and how, if applied incorrectly can ruin the experience entirely!  Also if applied correctly can provide fun and intrigue from start to finish!

I know you took inspiration from sensorial memory to create these three scents. Are you interested in releasing more scents in the future and perhaps even expand to men’s fragrances too?

Yes, I will be releasing more scents, these too will have sensorial memory but of a different vein, and yes I would love to develop a men’s scent. My husband keeps bugging me so it will happen for sure, I’m just not sure when.

Being a top model I am sure you are always aware of the latest fashion trends and how those ebb and flow over the years. Are there “fragrance trends”? And if so, would you be influenced by them in your business?

Yes, there are definitely fragrance trends and since I am always reading and curious about other businesses and want to know what is working, I am sure I am probably influenced. Yet, I have in my mind several ideas for future products and do not really care if they are “on trend” as I am confident in my Brand.

You are currently working with single note scents; have you given thought to adding elements to those or combining new ingredients for future products? Or is the single note an important part of your company’s mission statement?

Single not scents are not part of my mission statement, yet they are the foundation of the company, I believe. I will definitely be mixing scents though and actually am doing a project that will be out next fall, which will combine a couple of my favorite scents.

Can you give us a hint of what that project entails?

This is a candle/scent project I am doing for a new boutique hotel in South Beach, which will be opening in the Fall of 2014.

What do you feel, differentiates you the most from the other major fragrance lines? What makes you proud about your product?

It is a niche product that feels more like a high end fragrance brand, I love that it stands on it’s own and does not feel mass produced, it has a unique quality that intrigues people before they even get to the scent as well as being Made in America. I could go on…I am so proud of my product.

How did your modeling career influence your business?

Do you mean did the contacts I made help??  For sure, I love being able to work within my industry and be supported by those I admire. [It is] such an amazing feeling. Also being self-employed all my life gave me the hustle I needed to start my own business.

Would you consider “designing” a fragrance for a big name brand in your own standards of making perfume?

Absolutely…would be great to have those resources to work with!

Where would you like to see your company in ten years from now?

I would like to have expanded my fragrance line to include more oils and high-end fragrances that include special projects and collaborations with artists as well as adding a line of skin/beauty products including candles and perhaps even a small capsule collection to go with each season. Ten percent of the net will go towards supporting women and special projects.