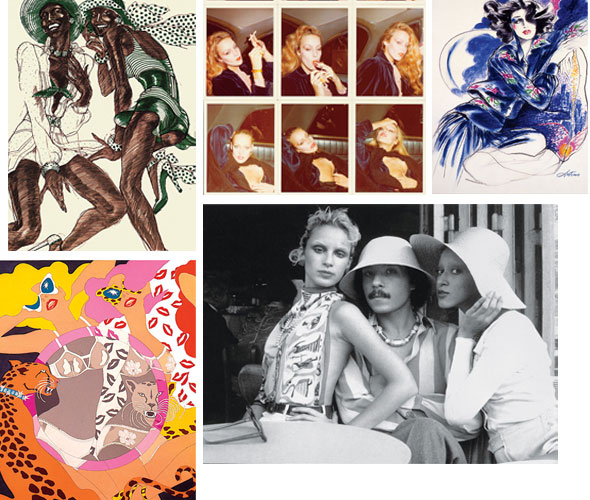 Great voyeur of the creative effervescence of fashion in the 20th century, the illustrator Antonio Lopez now has a posthumous book and exhibition which displays his trajectory and puts him back at the top of the fashion pyramid.

There is no doubt that there are many important and talented fashion illustrators throughout the history of art. Unfortunately, many of them forgotten with time. The Puerto-Rican Antonio Lopez is one of them. Left in the shadows for years, the time has arrived for his name to be brought back to the limelight. The homage is made by the publisher Rizzoli, which releases this month “Antonio – Fashion, Art, Sex & Disco” and invites us, by way of the book, to embark the world of fantasy and glamour of the greatest voyeur of the creative bacchanal that took place between the 1960’s and 1980’s.

In his drawings and photographs, seductive creatures and brilliant minds which walked the fashion world: from the designer Roy Halston and the pope of Pop Art Andy Warhol, to the top model Pat Cleveland. All of them, at some point hit by the innovative look of the duo of artists. Yes, duo, because behind Antonio’s name, we highlight his partner in crime, Juan Ramos. He was the one who kept the creative forces on track and made sure that their ouvre was seen by the audience and caused the desired impact.

The aforementioned impact is the epicenter of this 304 page tome, edited by the brothers Mauricio and Roger Padilha – the same who created “The Stephen Sprouse Book”, the best-selling art book of 2009. “Us both were very inspired by the work of Antonio and we hope the future generations can witness the magic of his art” says Mauricio.

The illustrations of Antonio, who died in 1987, were made into cover of magazines, fashion editorials, advertising campaigns and even runway shows. His visionary imagination influenced, for instance, designers like Anna Sui, Norma Kamali and his personal friend Karl Lagerfeld. It was in Lopez that the now fashion Kaiser found the necessary strength to step away from under the shadow of the then rival Yves Saint Laurent and shine as a fashion designer in Paris.

What the book does now is not only tell the complete story of Antonio, but it also places us in the center of the work of the duo. Lopez and Ramos lived surrounded by their posse, day and night, and the fame of some of these characters, along with these two artists made a cabaret out of life. Among their friends were Jerry Hall, Jessica Lange and Grace Jones.

During three decades the work of the duo transcended all medias and no longer only existed in paper but in the collective consciousness and daily life of fashionistas worldwide. “I don’t believe there will be another person capable of surpassing his talent as an illustrator and use it to translate the social climate of his time” affirms Roger Padilha.

There will also not be another person who will influence the masculine wardrobe like Antonio. The introduction of colors, fur and shine into men’s wardrobes can be credited, in great part, to this genius of fashion. Always dressed like a peacock, he used to catch the attention of the media and made the color fever one of the reasons why men’s magazines were created. After all, it was necessary to supply for the demand from the battalion of men who were being inspired by the singular visual of the illustrator.

“He still influences the fashion industry. In fact, he influences us too. Antonio lived his work, and to him, there was no separation between professional and personal life. We try to behave the same way”, say the authors, who for over 20 years have run the PR agency MAO, in New York.

It’s in this same city that, until October 6th, the greater audience will come to know the legacy of Antonio Lopez. The exhibition “Antonio’s World” will take place at the hyped The Suzanne Geiss Company, in Soho. The exhibition spans three decades of the illustrator’s work, transformed in an installation as impressive as his work.